I am not much of a writer ... but the vast mountains and lovely people of Spiti made me so...
Its a place unlike any other... it has beauty in every angle and direction. The friendly, no fuss people of the place make it more so. I as a solo traveler to this place - felt completely safe, relaxed and was deeply touched by the experience.
Spiti - Kaza is a jewel hidden behind the green side of Manali hills. Its on the alee side and the road to this place is quite dangerous. The place is cut off from the rest of the world almost the whole year round - however the road opens in first week of July to end October. After that, there's a way to get to this place through Shimla but its wrought with danger. Hence, tourism is best from July to mid Sept as after that the weather starts becoming unpredictable and god forbid if caught in snow storm - there's very little help in this area due to extremely thin population.

I made my trip in Aug 2013. Spiti - Kaza is 6 to 8 hours away from Manali. Reaching Manali from Delhi takes a day.
Starting with Chandigarh Shatabadi in morning, thereafter a car drive, one only reaches Manali by eve. One needs to do a night stay in Manali. As journey to Kaza takes another 6 to 8 hours hence, its another day ahead. I was with a group of mountaineer friends who were heading that side for trekking, while I for discovering the culture and the place.
We started early morning by 7 am to our journey to Kaza. The view from Manali to Rohtang is lush beautiful and breath taking. Its one stretch of road thats my eternal favourite - it right out of a dream sequence. Beautiful, green, cloudy, misty and very romantic. 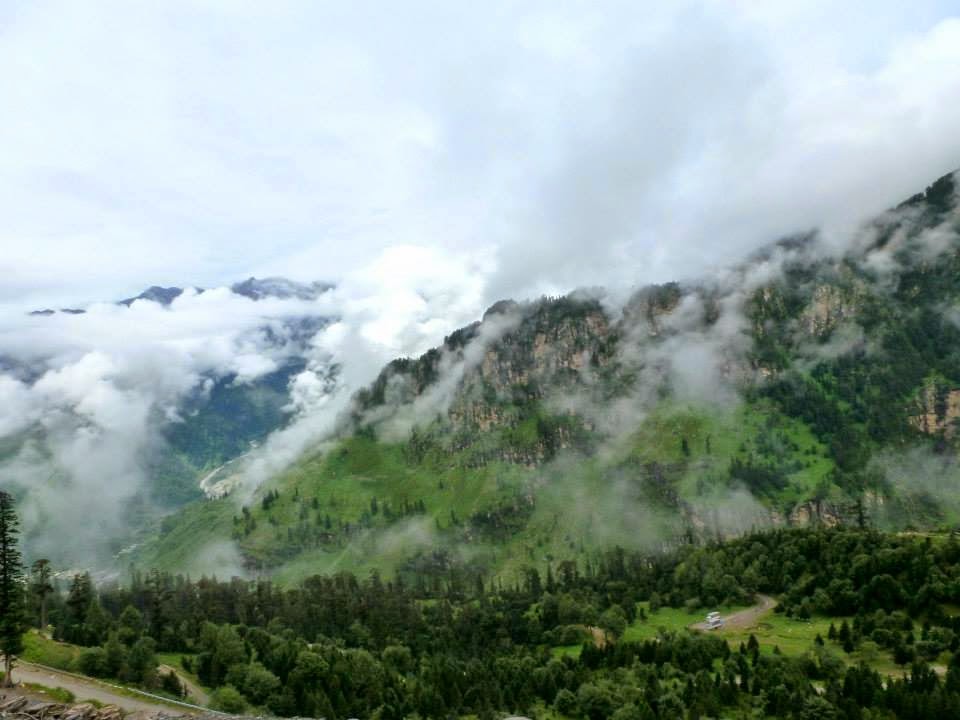 Going ahead, you cross the beautiful Kunzum La on the way. All vehicles irrespective of the faith they follow, stop here and pray for safe journey in the hills. Not stopping here is considered bad luck - and also its the center of the hills - who wouldn't want to stop here for some breathtaking views. 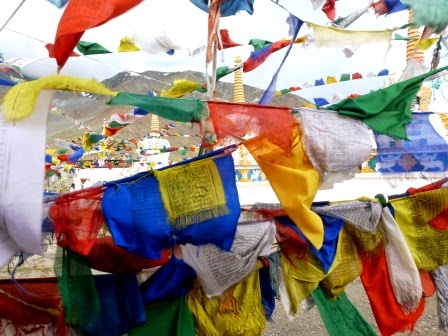 The terrain ahead gets quite rough and edgy. Along the way... you see Spiti River .... and some more majestic mountains...Some people call Spiti a poor cousin of LEH!!! Leh is one of my most fav places in the world and I think its like none other. But Spiti is different, the river bed is expansive and flowing right in front of you. To discover the beauty of Leh - one has to step out of the city while here the river follows you in all its majesty. If it has to be compared to Leh - then Spiti is a mystical cousin. 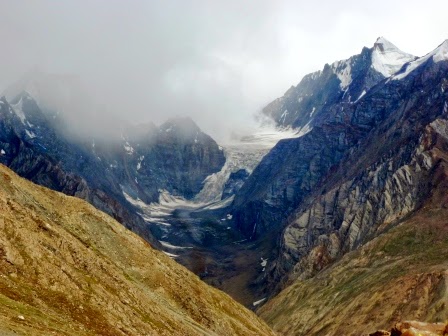 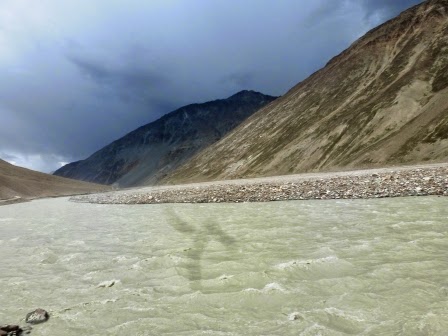 This whole magical land is on the alee side of the mountains.. so its a stark contrast from the greenery and mistiness of Rohtang and Manali...
It is also known as cold desert ... which in summers - that is Aug thankfully wasn't very cold.. but awe inspiring beautiful. 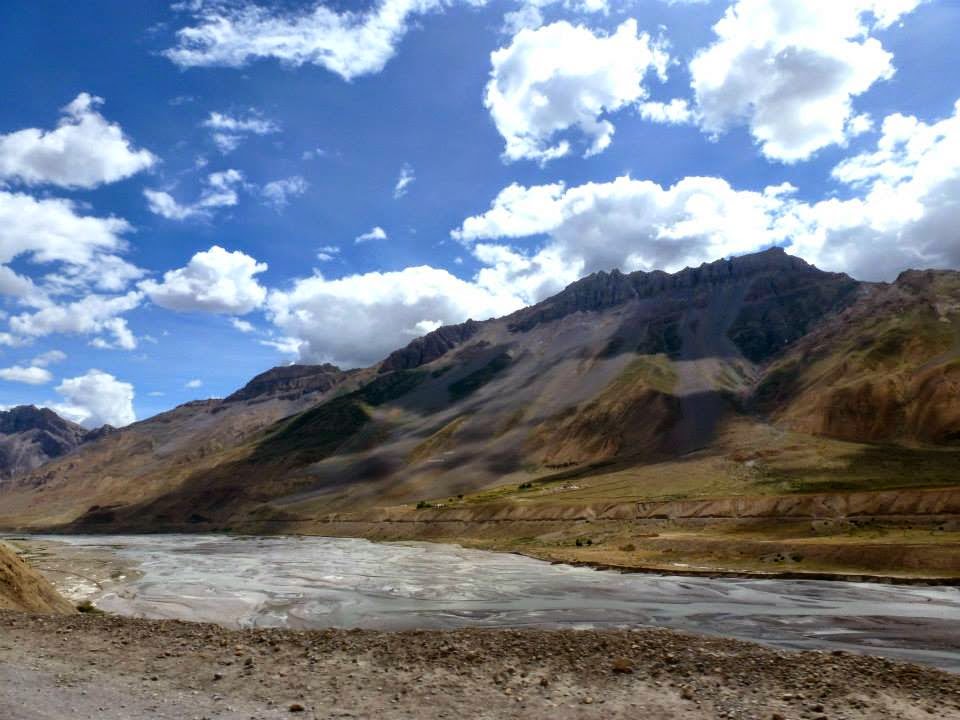 The different colors of the mountains, the rawness, the loftiness is definitely worth a life time experience.


We had a quite a few flat tires on the way due to the rocky terrain. But our driver being a native was well prepared for it. My first night in the area was spent in tents along with the mountaineers which was quite an experience as I was doing this for the first time. 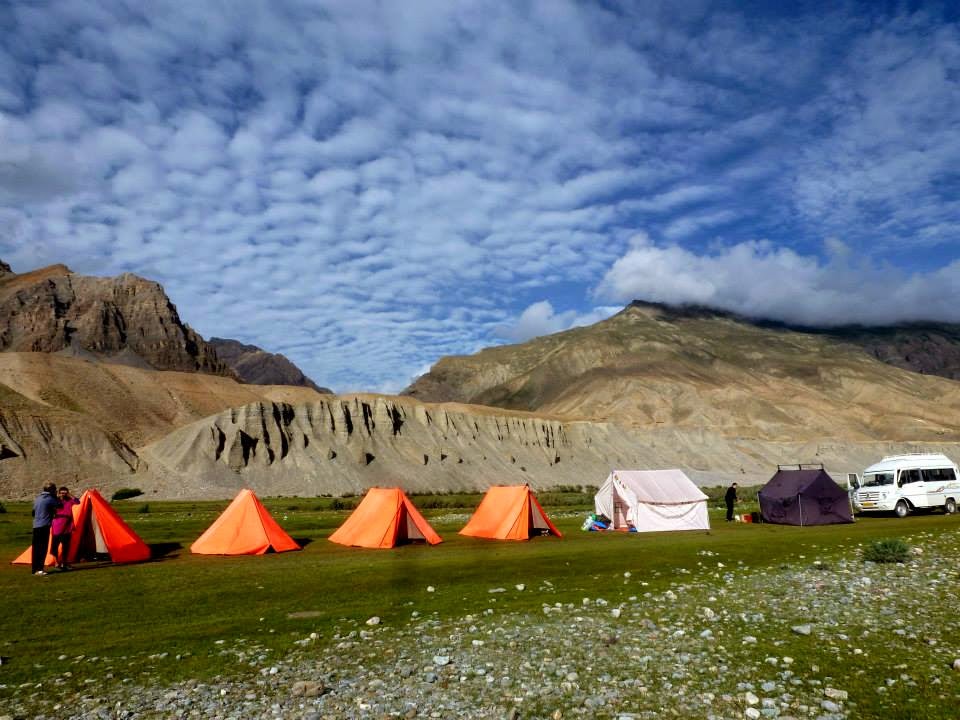 As you can see its picture perfect. I was greeted by this wonderful sight in the morning after I got up and stepped out of my tent. Thereafter, we visited one of the oldest villages in the place called Khibber. It has a population of approx 150 people and also has an old monastery in Khi that's nearby. 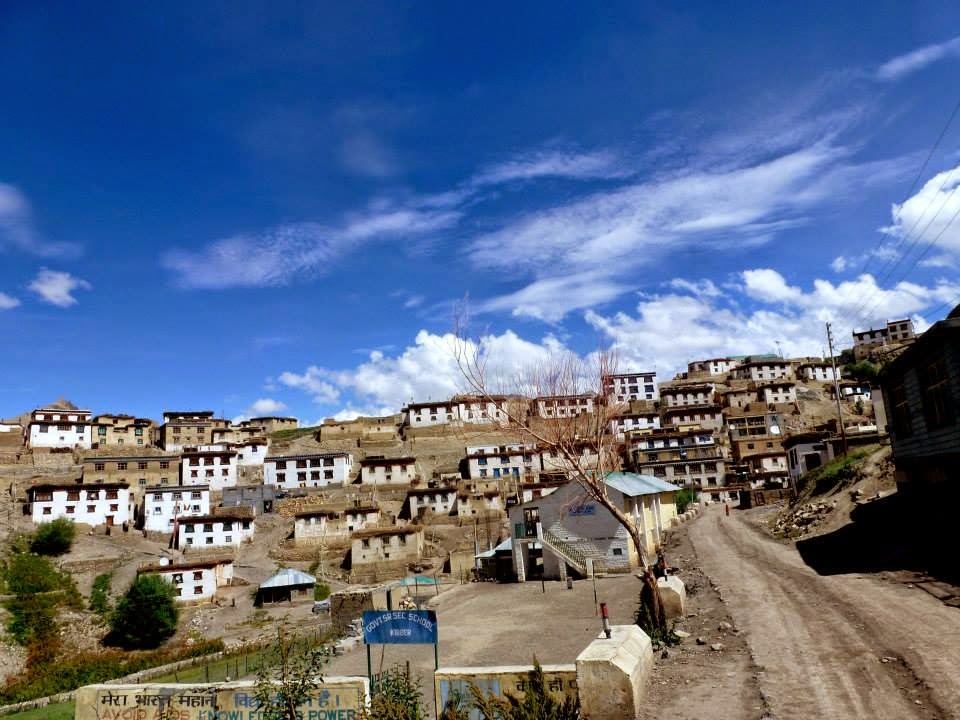 In these places life is simple, hassle free. They had no electricity for past 2 months.. and rely on solar power generation. Houses are so well lit that you don't realise the lack of power.
Later after a day, I separated from my group and went trekking alone. I went trekking to Dhankar lake which is quite a steep trek but a short one.
There isn't much to the lake, you can skip it if one wants to. The trek since its steep is fun. 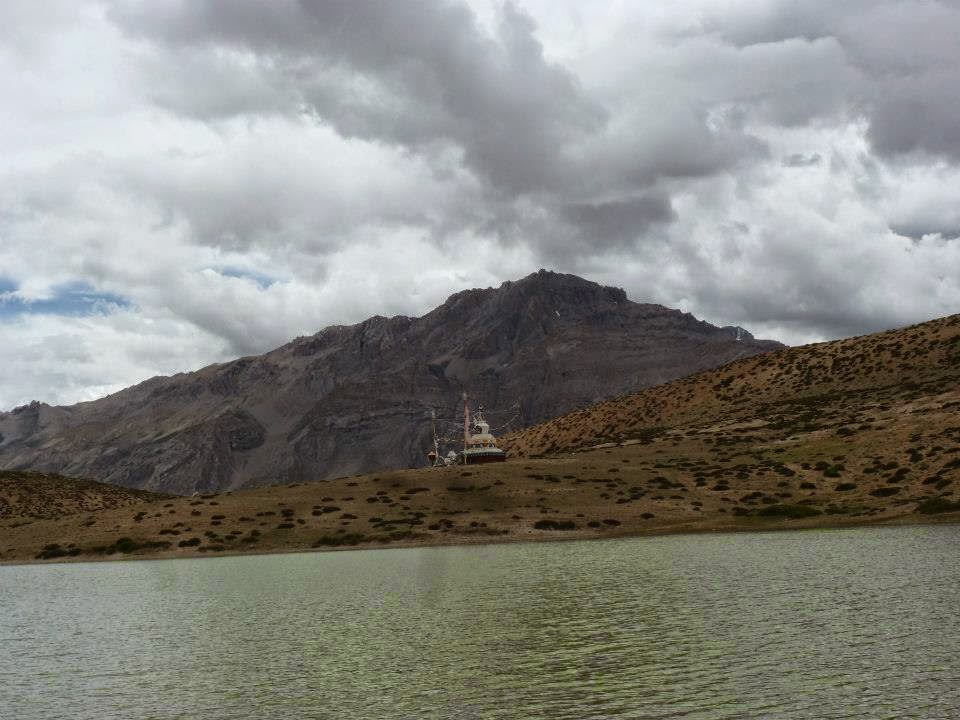 After Dhankar, I moved on to my trek to Langza Komic  from Kaza.

In Kaza I was staying in this beautiful hotel called Sakhya Abode - which is run by the monastery. Monastery commissions the hotel to a business family and shares the profit with them. The place had Nice large rooms, wonderful hospitality, my stay and tour was taken care by the Incredible Spiti team. Incredible Spiti team is run by natives of Spiti who know the place better than anyone else.. everyone knows them in turn which makes it very reliable and comfy in such a faraway place. Despite the fact that the place had no electricity for more than 2 months, the place is clean, neat and well lit up! you don't realize the lack of power till you closely observe.
Kaza is the metro city for all the nearby villages. The total population of Kaza would be approx 1000 people and is the only place where you can find electricity - if you ever do.
The hotels give warm water warmed through traditional hamams of wood. Everyone only gets a bucket of warm water a day. The hotel is right in front of the symbol associated with Spiti - that is these prayer wheels. 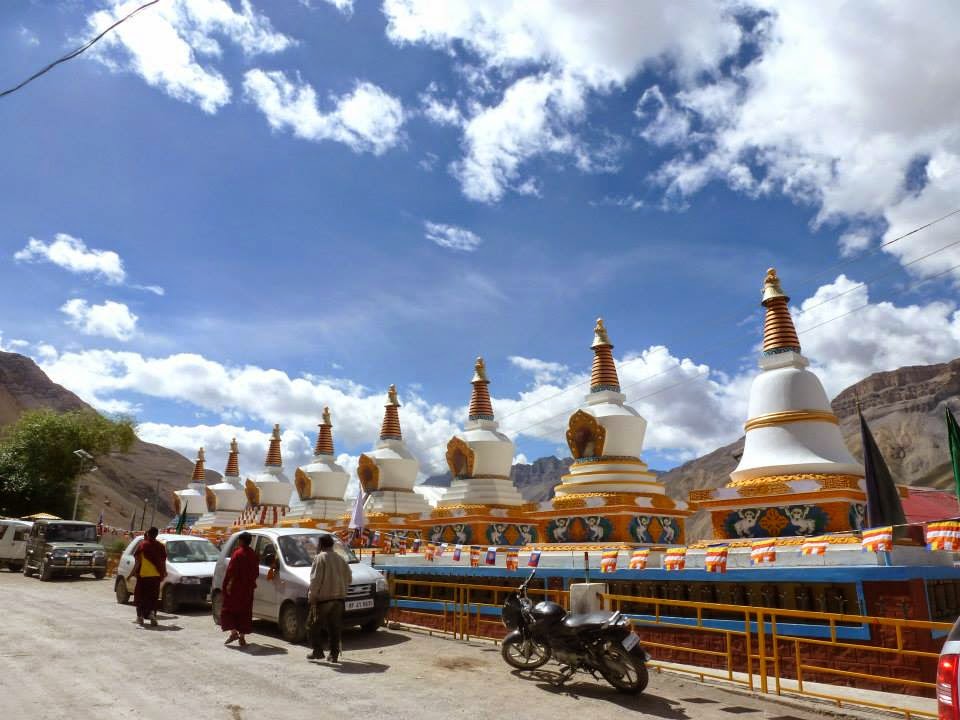 The place has beautiful people who understand Hindi well.. the youngsters know English quite well. So communication is not a problem at all. 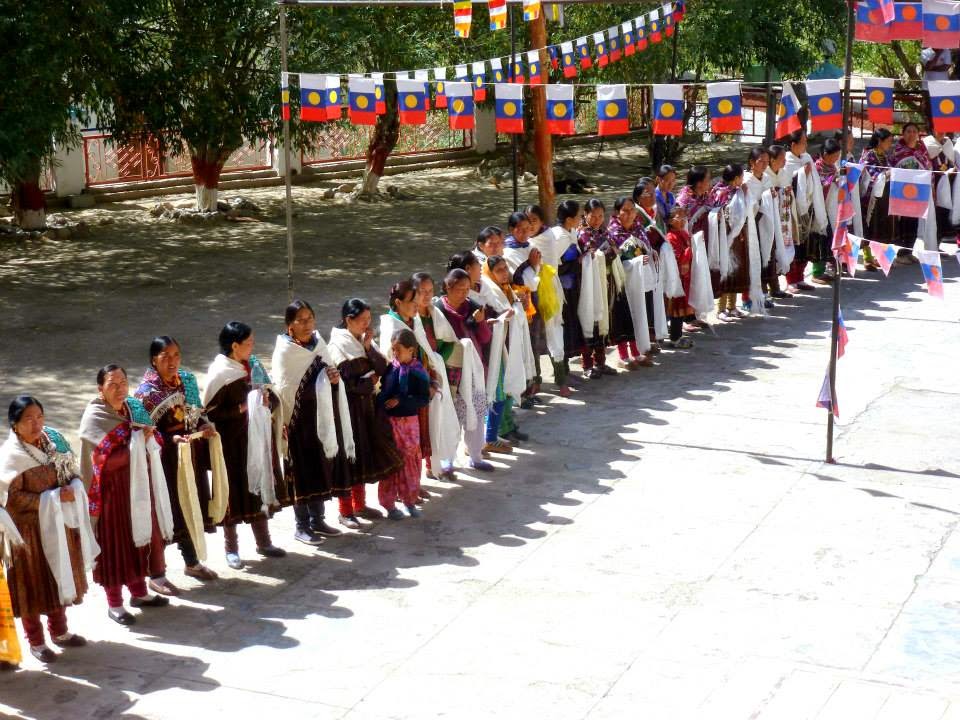 This is a place with harsh weather conditions. People survive on gen sets, solar and candles...its extreme living conditions with back to basics stuff.. weather is unpredictable, snowstorms happen, roads get blocked.. so if one plans to be here.. one needs a very reliable source who can handle emergencies and take care. People are very cordial, the only safety one needs is from nature. While I was there, the Pin side had flooded away and my mountaineer friend group were headed that side. Incredible Spiti team informed them well in time - which was a huge relief as many people had washed away, and also they helped arranging things for my friends even though they were not using their services.
A lot of travel agencies call themselves expert in Spiti - but this is the only team I saw at work while I was there. All the work even from Manali was outsourced to them - hence I repeat - one only needs safety from nature here and no one knows it better than locals. So stick to their advice and have a local guide from Kaza with you always and not Manali or any other place.

In Langza - I did a home stay in one of the traditional houses. The kind that are everywhere in that place. Made of mud, warm and very hospitable. 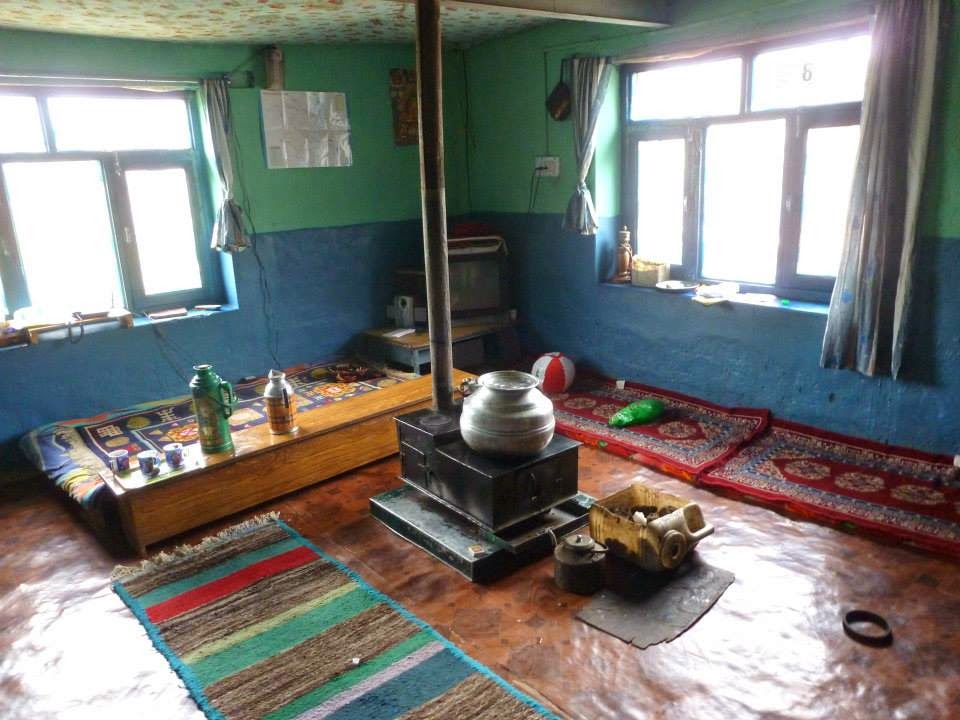 This 80+ old granny loved that as a girl I was doing a trek alone and exploring the place. She was very warm, hospitable and treated me with some great tea as she realised I love tea! 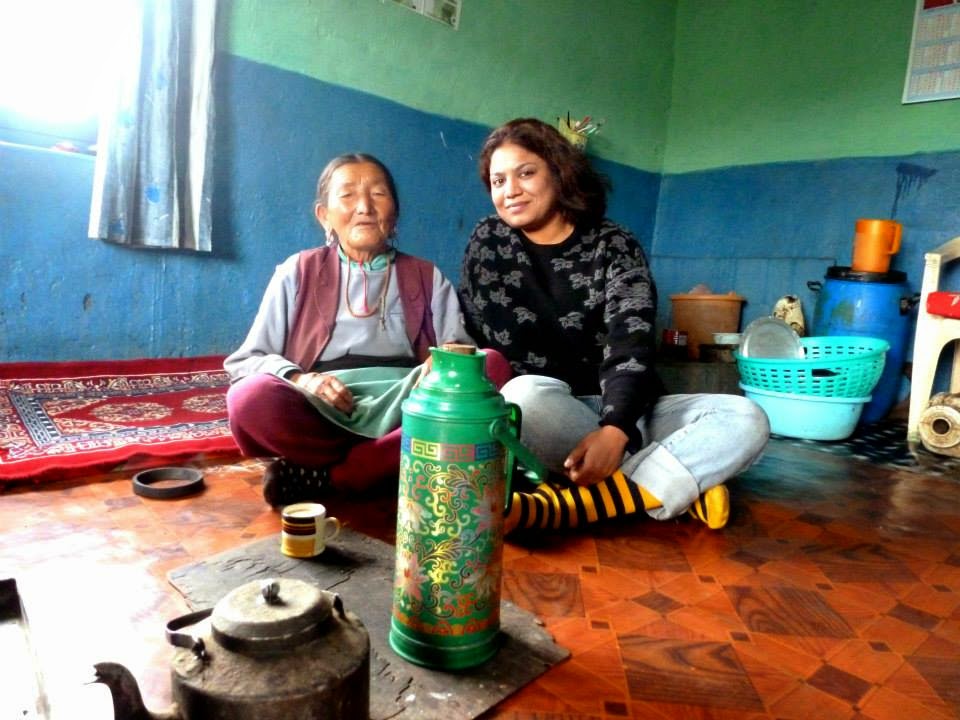 Trekking was treated with some great views on the way.. 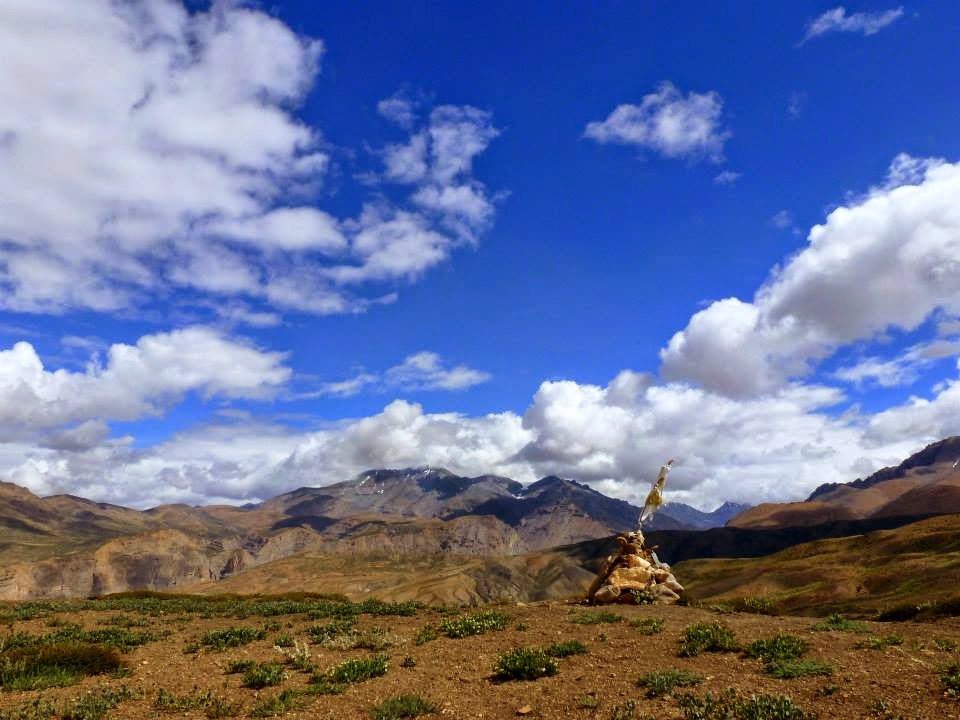 .
After trekking till Komic, I came down to Kaza - back to my hotel. From there I headed to Tabo.
Spiti has some amazing monasteries for history enthusiast. Tabo is the oldest monastery in India. It is the most amazing monastery I have seen till date.. and I have seen quite a few. It is called the Ajanta of Himalayas and no photography is allowed inside. 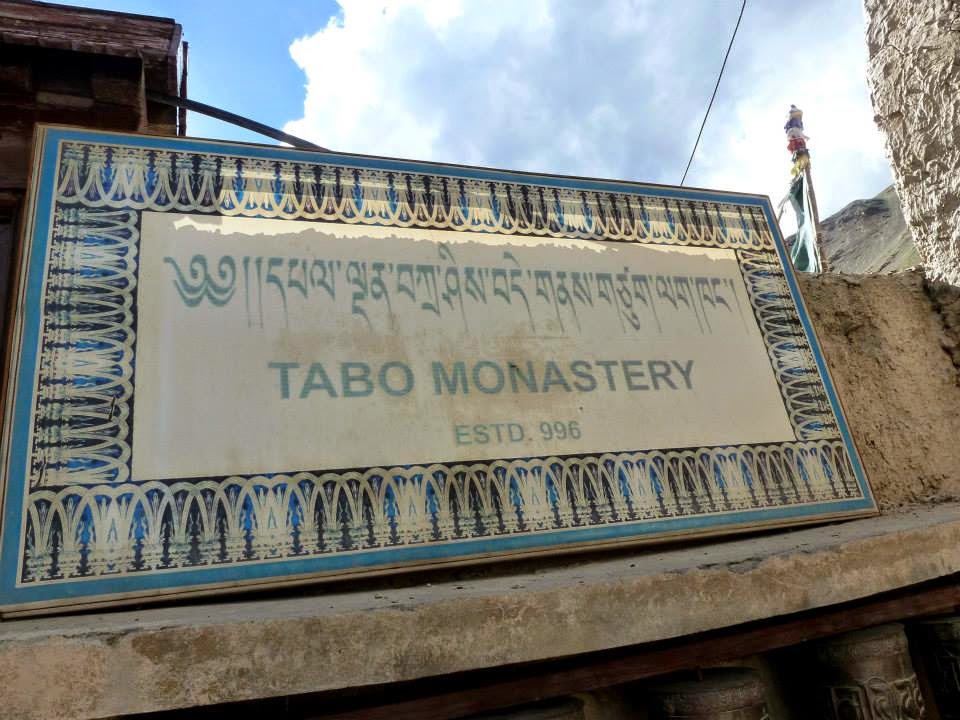 This was one place I could sit for hours and hours and not get up. Infact, I came to know on visiting that Dalai Lama has chosen Tabo as his retirement place. His Holiness is also visiting Tabo in 2015, for which the whole Spiti is working from 2012. A beautiful monastery unlike any in the world.

After Tabo, I chose the exit route to Manali via Chandrataal. Words defy me when it comes to this lake. 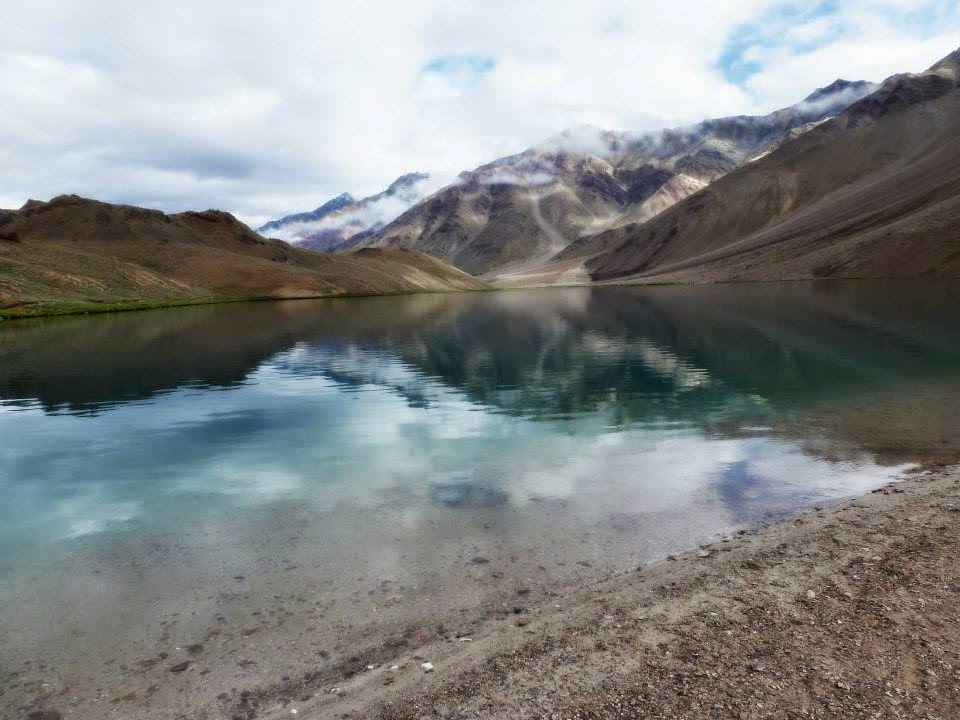 A lot of people i know tend to compare it to Pangong lake of Leh... well its neither similar in shape, size or feel of it... Chandrataal is different... its subtle, you need to speak to it.. feel it, wait for it show you its layers, colors... its not flashy, not in your face beauty... it unfolds gently... I know this all sounds poetic... but you would too become one.. once you sit near the lake and let it unfold itself... its a beautiful soothing experience, unlike any other... do not go to place thinking of Pangong or any other lake you have seen... as here you dont know what you would find... you might find the clear reflection of mountains, or clear deep blue or a deep disappointing green of a pond... or some colors you wouldn't even think you can see... let it be... sit by the lake, give it sometime... if it knows you are patient... you will know why it is considered an abode of fairies by the locals 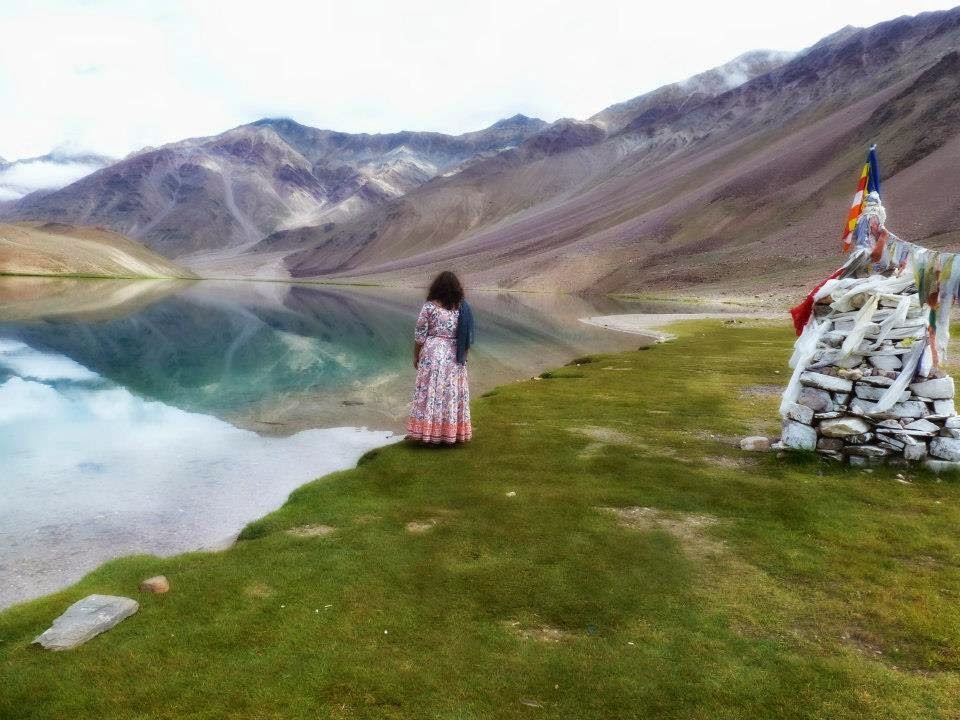 Go to Spiti... immerse your senses in beauty!
Posted by Yesha at 10:24

Yesha
“I cannot understand why my arm is not a lilac tree.” - Leonard Cohen.............. Doesn’t the world have enough blogs already! Why add another one... The idea of this blog is to share art, beautiful things… To be away from noise, loudness, chaos. I am trying to create a book here for myself that I can sit down at leisure and scroll through. Some memories, some travels that I would want fresh in my mind always. A book that has pages of my own work, others work that's my favorite, things that I admire, my travels, my experiences. So in these pages I hope you find beauty, calmness, experiences and reviews that are of use to you, and what is all this without a little nostalgia and tug of pain at heart!